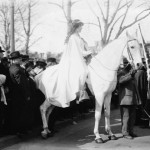 Half of the world population (7.06 billion) including the U.S. (314 million) is comprised of women. Yet, in the U.S., women occupy only 6% of all executive leadership and only 20% of all management positions.  These percentages are dramatically worse in less developed nations. This means that communities and countries worldwide are unable to capitalize on the full potential of over half their societies.

On the 3rd day of March, history was made when Inez Milholland road in on a white steed. It was that day, in the year 1913, where a crowd of 5,000 women and men from across the country peacefully walked Pennsylvania Avenue fighting for women’s rights. This Sunday in its 100th year anniversary, Americans will for the second time, storm Washington commemorating those trailblazing women who came before them. They will call on their country to, once again, recognize women further in legislation, in the workplace, and in the 21st century.

Inez Milholland, will be remembered Sunday. A lawyer and a progressive, Milholland led the march in 1913 promoting equal franchise. Although she may have been buried in history, her voice will be aloft in the crisp winter air this weekend-rising above the footsteps of marchers who over a score ago trekked the same grounds.

But the work isn’t finished. And it will not be until the subject of gender equality becomes a talked about issue.
Without using loaded words such as “feminist” to intimidate young women to speak out about better representation in the workplace. Not until wages are made equal. Not until women, from all economic levels, can have better access to health care, such as contraceptives.

Because the movement Sunday is not about having different rights for women, but the same rights for women. But why stop when so close to the finish line?  And like the hundreds of women and men that will be attending this weekend’s march down the Mall strip, the United States must continue with the same momentum.